You will now be directed to our new Graphics Portal :

Angular vs React: Which Is the Best Choice for Web Application Development? 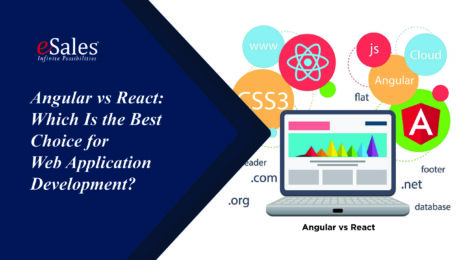 If you are planning to develop a new web development project, it is crucial to pick which frameworks and libraries would make your web application more powerful.

Javascript is the backbone of web apps; most of the software developers are still in confusion about which frontend framework would be suitable for their web application project.

Let’s see which javascript framework would perform best for your next big web application project.

Overview of Angular and React

Angular, a javascript framework that is developed and maintained by Google. The first version of the AngularJS was launched in 2010; Angular 10.0.2 is the latest version.

Angular allows websites to render quickly and efficiently. It’s an all-in-one framework, with built-in tools for routing, state-management solutions, and form validation. Angular is built on TypeScript, a superset of JavaScript.

React.js is a well known JavaScript library Developed and maintained by Facebook. It focuses on building and rendering components for a web page. It aims to divide the UI into a collection of components to simplify the development process of visual interfaces.

Developers need to use additional libraries to include functionalities in React.js. For example, routing is not included in React.js, so that would have to be added manually through third-party tools.

Performance is the crucial factor for a frontend application. When we compare the performance factor between Angular and react, both take different approaches to update HTML files. DOM is considered as the UI of any application.

The popular frontend framework angular uses the real DOM, which is suitable for the single-page applications where the content is occasionally updated.

Angular is a two-way binding process that duplicates all the changes made in Model into the views in a secure, efficient, and intuitive way.

React uses Virtual DOM. It enhances the performance of the application of any size which needs frequent content updates.

React is based on single-direction data flow. This will provide better control over the entire project.

Since Angular is the wider framework, it deals with everything from project creation to code optimization; it is the most challenging framework for the overall deployment. However, as Angular provides you with a wide array of features, developers can get a fully optimized bundled app to deploy to any static host by using a single command.

While React doesn’t come with the same tooling as Angular, it makes the tradeoff for flexibility. You can mix and match any library you want to React. With the growth of the ecosystem, we now have CLI tools like Create React App and Next.js.

Angular Vs React: Tips to Choose

When to Choose Angular:

● To develop a large-scale and feature-rich application.

● To develop native apps or web apps, which are long-term and substantial investment projects.

When to Choose React :

● To develop light-weight modern applications in a quick time frame.

● A flexible framework that assures you a secure website development solutions.

● To enlarge the existing app’s functionality.

Angular and React are the real titans of the rapidly advancing ecosystem. We tried to compare the different key factors of each framework without getting biased. The only motive is to offer this comparison guide to help you to understand the background and functionality of these frameworks so that you can select the right framework for your next big web development project.

The differences are based on facts, surveys, and case studies of leading organizations. Still, we recommend you do your research before making any decision when you are going to be working on a business project.

Welcome to WordPress. This is your first post. Edit or delete it, then start writing!

GET A FREE QUOTE

Please fill this form and we'll get back to you as soon as possible!